"Britain Before The Beatles": Amanda Hallay at Franklin Electric

Amanda Hallay will be giving a talk at the trendy Franklin Electric Coworkers space in Brooklyn on Dec.1st (details below) as part of the Think Olio project on "Britain Before The Beatles." 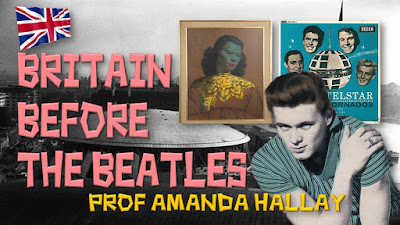 “England Swings Like a Pendulum Do!” And so it was in the 1960s, The Fab Four’s arrival on U.S soil pulling down a transatlantic drawbridge to a nation that would dominate every aspect of popular culture for the rest of the decade. From Mods to Minis (both the car and the skirt), from The Rolling Stones to Herman’s Hermits, from Carnaby Street and Twiggy to the films of Richard Lester, nothing could possibly have been cooler, hipper, and more in-tune with the burgeoning Boomers than Britain in the Sixties.
And yet cultural history has seemingly decided that Postwar British culture began in 1964, and that England in the ‘50s was a dismal, postwar backwater of ration books and council houses. True, America had Elvis and Eames, but in this Olio, Professor Amanda Hallay will attempt to disinter the pop culture landscape of ‘50s England, arguing that many of the most iconic American Mid-Century signifiers actually originated in Britain. Before there was Googie, there was The Festival of Britain.  Before there was Warhol, there was Richard Hamilton. Before there was Tiki, there was Tretchikoff. And while British rockers such as Cliff Richard and Billy Fury were arguably little more than Elvis imitators, Britain had producer Joe Meek, the first person ever to use sampling and reverse (techniques that would later be employed by everyone from The Beatles to Jay-Z!)
Yes, there was a Britain before The Beatles, and in her talk, Prof. Hallay will tell you just how incredibly cool it really was!
Tickets and details on Think Olio's website:
"Britain Before The Beatles": Details and Tickets
Return to amandahallay.com

Posted by Unknown at 4:15 PM No comments:

The Ultimate Fashion History
Reurn to www.amandahalay.com
Posted by Unknown at 3:41 PM No comments: